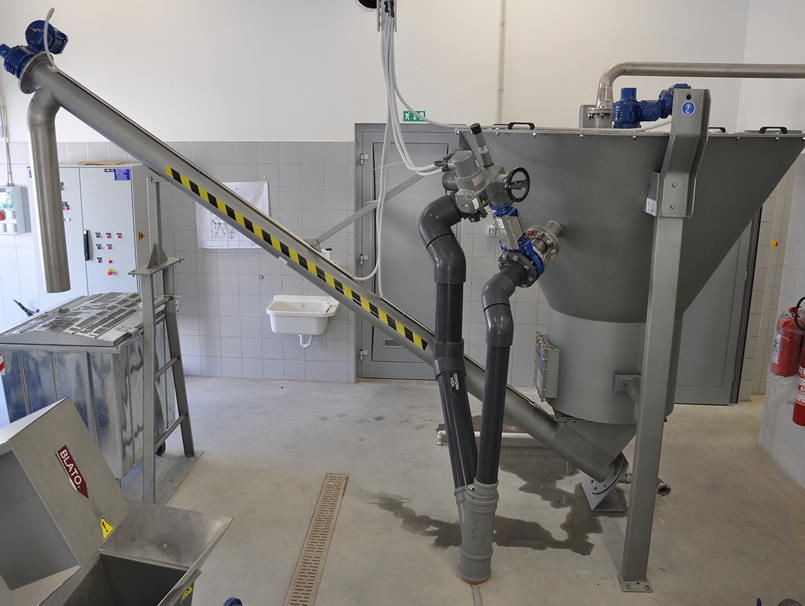 Grit incoming from the WWTP:

The grit form the waste water treatment plants , which has been separated by the means of conventional aerated grit removal systems or grit classifying systems, do not comply with the new regulations due to their high organic content.

The reduction of the organic content in the grit can be achieved by means of an innovative design: the grit washing HIDROSAND plant that combines the functions of a conventional grit classifier “classifying-transport” with an additional grit washing system. In such way, it is possible to economically reduce the content of organic matter in the sand allowing:

-its elimination in the spillways of inert residues or municipal.
-its recycling

Classifier and washer in one equipment

This is possible with the HIDROSAND effect.

With the Sand washer plant HIDROSAND plant, the grit classifying and washing is carried out in single equipment. Using the HIDROSAND effect, the process allows to achieve in a simultaneous and continuous way a high separation capacity and washing performance.

This separation of the mixture of grit and organic matter is supported bi means of an agitator that spins at low revolutions.

The clean grit is extracted by means of a transporting conveyor; it is dehydrated and discharged in a container.

On the other side the separated organic matter that stays in the equipment is automatically discharged.

The grit classifying with the HIDROSAND effect

The feed to the system of the grit mixture, organic matter and water is made by the HIDROSAND tulip. By means of the HIDROSAND effect, the rotational entry flow passes from vertical direction to horizontal, and simultaneously it goes to the container’s walls. The figurebelow shows that the speed of the flow is yet to high at the entry of the equipment (red area) and that it is significantly reduced (green area).

So, the frit grains, organic material, etc., are separated due to the combination of two effects: the deviation of the flow and the reduction in velocity. This allows the sedimentation of the solids in the lower part of the tank. This special flow conditions result in a performance higher than 95% for grit grains of size higher or equal than ´3d 0.2 mm.

The separation grade depends of the sedimentation velocity of the solids (density and size have influence). This supposes that not only grit is separated, but also organic matter.

Treatment in the fluidized grit bet.

The separated grit is washed, thus the organic matter is separated from the grit. This takes place in the bottom of the tank due that the conditions in this place are ideal because of the low flow velocities.

For the washing of the sands a service water flow is introduced by the lower part of the tank that creates a fluidized bed of grit which allows the separation of the organic matter from the grit, with base in the different densities and independently of the size of the particle. 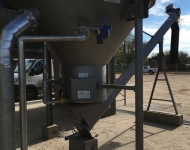 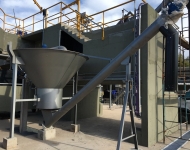 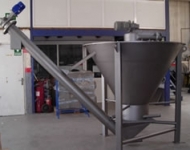 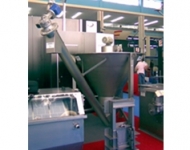 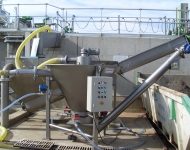 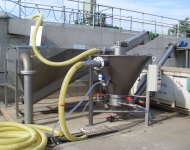 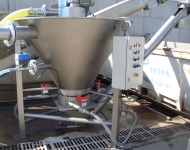 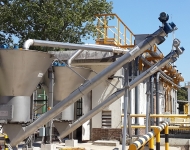 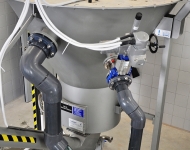 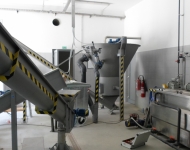 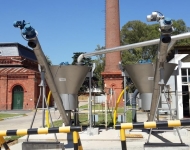 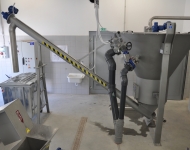 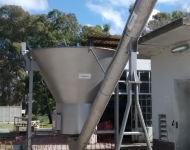 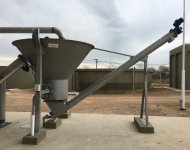