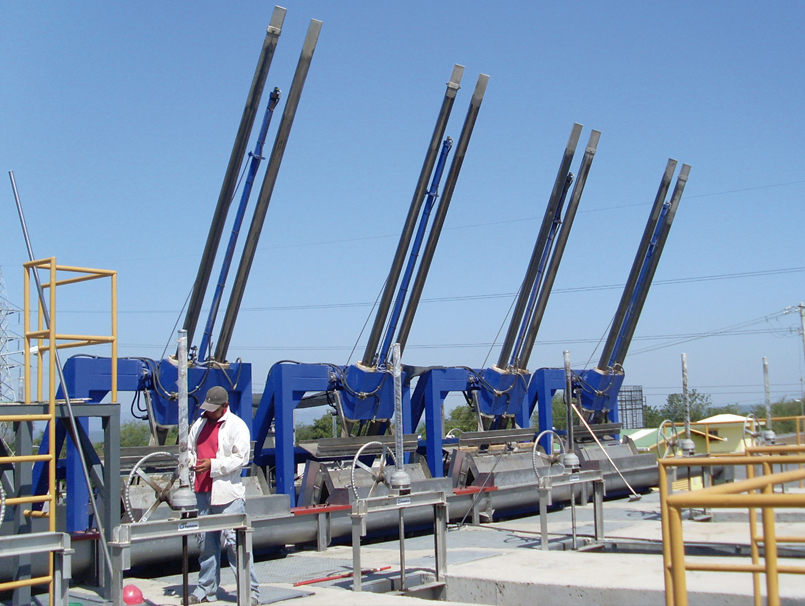 In order to try to solve the separation problems, an Automatic Screen System with the following advantages was developed:

In year 1983 the two first screens with these requirements were assembled in the Vilanova and Geltrú E.D.A.R. for our client Dragados Construcciones, S.A.

From that date on, we have been constructing them, and at the same time our technical department has been introducing improvements that have increased its performance and dependability and reduced its maintenance.

Basically, the operation idea of the HIDRORAKE screen, is to reproduce by means of a headstock and two oleo hydraulic cylinders, the movements that a person would do to clean a screen with a rake, which would be,

– Raise the rake, and being in upwards position, put it down to the bottom of the channel
– Nail the rake in the screen and pull it upwards, raising the solids retained in the screen
– Discharge the retained solids in a container, endless carrier, band, basket….

For the operation of the HIDRORAKE Screens, there is a control board placed in a board, which contains the hydraulic and electric group. In that board are located;

If the screen is originally equipped with endless band, compacter, or garbage extraction conveyors, the board will include;

The board is protected by a transparent metacrilate casing that prevents it from getting wet in case of positioning trough it.

When the screen is located in places without surveillance or fence, the command board is protected by a metallic cover with key that prevents it from being manipulated by strangers.

One advantage of the operation of the HIDRORAKE Screen is that it in no movement in the rake it has fixed guides, which means that if it cannot raise the quantity of retained solids or if a stuck object is retained, it stops rising, it raises above the object, advances and comes down again continuing its way up to the discharge point.

To eliminate the maintenance problems, we have placed the following ;

– The scraping arm in stainless steel, AISI-304 or 316 quality.
– Nylon exterior supports (without greasing).
– Filtrating screen, in stainless steel of AISI-304 or 316 quality.
– Body and frame, in carbon or hot dip galvanized steel.
– Hydraulic elements, submerged in oil.
– There does not exist any submerged mechanic element.

The needed maintenance consists in watching the oil level in the deposit.
Due to the special operation characteristics of the Screen HIDRORAKE , a screen of triangular profile has been developed, with which an effective passing of up to 1.00 mm is obtained. This screen and the rake that operates above it are stainless steel and do not have jags.

We will position the selector in manual position, and the we will press the start button, the rake will descend elevated up to the bottom of the channel, at the end of the its trip it approaches the screen and will ascend dragging the objects it finds retained, up to its resting position. A scrapper cleans the rake when it reaches the upper position.

At any point, when the stop button is pressed, the rake stops, maintaining its position. To start its movement, the start button will be pressed.

We will place the selector in automatic position, the operation of the screen will be conditioned by the timer, which we can determine as many times we want the screen to operate in an hour and during how many time.

The cycles described in the manual operation are repeated in the automatic one.

If the screen is equipped with an endless compactor or with a transporting band, by placing its selector in automatic position, it will function at unison with the screen. In order to prevent the mentioned equipments to remain full of garbage, when the screen performs the last sweep and stops, the endless compactor or the band, will continue operating some seconds, enough to dispose of the solids.

he movement of the rake, downwards, upwards, as well as the one of approximation to the screen, is protected by effort limiters that act directly over the oil flow that feeds the hydraulic cylinders.

These limiters are easily adjustable and because they are in the inside of the bench and in oil bath their characteristics are not affected by the pass of time.

The discharge of any of them produces the stop of the movement it controls, without being near to impair the screen or any of its components.

Four limiters exist, which protect with different pressures the four movements of the two cylinders.

This allows us to adjust the effort of each movement independently from the rest.

The screen is electrically protected by thermal magnets with differential and general power switch.

For the maneuver circuits, the tension has been of 24 v, both inside and outside, complying with the manual regulations.

o start the screen, it can be equipped with:

A maximum buoy, upstream if the level goes up excessively indicating the screen is dirty, the screen will start operation until the level descends, this will happen provided that the screen selector is in automatic position..

In the normalized electrical board the circuit of this buoy has an exit lead, but the buoy does not

A buoy upstream and downstream, the buoy down will give us the start order when it descends up to a minimum level, provided that the buoy upstream detects it exists a superior level.

A system to detect charge loss, this system allows predetermining a maximum charge loss, in function of which the screen will start operating.

The employed system may be by means of two ultrasonic sensors or through two detectors and a differential pressure measure..

Distance control, the electrical board, exits can be foreseen to detect from distance the electrical failure of thermal trigger of the engines, we can also adapt a device that indicates a general failure of any element that produces that the screen cleaner can not finish a cleaning cycle.

The HIDRORAKE screen, is built by the following elements

Built in welded steel plate, it constitutes the support of all the assembly, formed by a fixed bench that is coupled to a metallic profile structure that has the mission of fixing the screen to the floor by jeans of metallic nails or anchoring plugs.

The command bench is fixed to the inferior structure forming a homogeneous assembly.

Movable head: It is built in stabilized welded steel plate before its mechanization; this bolster supports the scrapping arm with the picking rake.

The scrapping arm is fabricated in stainless steel tube and it slips by means of synthetic material cushions, anti wearing and that does not require greasing.

The traveling of the rake is made by means of a hydraulic cylinder.

The moving bolster is fixed to the static frame by means of an axis that allows oscillating movement, with which we manage to make the rake descend in an elevated position and gets up in position that presses the screen. We achieve this movement by means of another hydraulic cylinder, the cylinders are constructed with normalized materials and in the parts in contact with the water we put a hard chromium finish, to avoid corrosions and wearing.

The rake is built in carbon or welded steel, the jags are built in an independent piece, which simplifies its replacement in case of wearing down.

When the screen is of stainless steel triangular profile, the pointed scrapper is substituted by an aluminum lineal or other suitable material.

All the bolters have a built- in residual ejector, that cleans the rake once it reaches its highest position.

Control bench: It is constituted by a metallic cabinet, and the hydraulic group with the oil deposit is located inside.

At the front of the bench and protected by a metacrilate board, the controls of the screen are located.

All equipment is manufactured by EEC norms so its elements can easily be found in the market.

Endorsed to the bench or in its inside the electrical board is located, which automatizes the screen operation, being protected by a differential, thermals and fuses.

Screen: Our normalized screens are constituted in triangular profile and always in stainless steel material of AISI-304 or AISI-316 quality, for meshes from 1.00 mm up to 10 mm.

For meshes of 10 mm or more, they are built of rectangular profile and in AISI-304 or AISI-316 stainless steel materials.

The rake will have the same finishing and material of as the filtrating screen.
Because the filtering screen does not form a sole part of the Screen, this allows its replacement without having to disassemble the whole. This entails the possibility to change mesh, the material or the finishing very easily.

The normalized finishing of the elements that are part of the screen and the are:

Other materials can be used en function of the application of the screen.

It is guaranteed that the quality of the materials is according to the usual construction norms. In case of any construction or quality defects in a term of a year, from the delivery of the machine, ESTRUAGUA will repair or substitute the affected elements.

This service will be accomplished without any charge for the buyer.
This guarantee excludes the natural wearing down of each element and the damages that could be originated by defective service or maintenance given to the equipment. Also corrosion by causes nort considered in the offer are not covered.

Besides offering a telephonic advising service, to which all necessary questions can be made for the correct maintenance of the supplied machine, with each machine the corresponding operation, security and maintenance manual is supplied.

This manual is very useful and necessary because possible doubts may be solved about the exploitation of the machines. 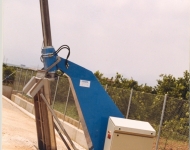 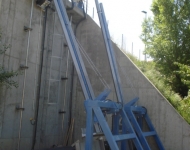 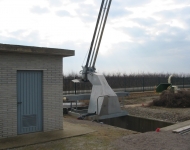 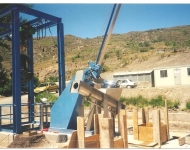 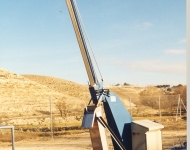 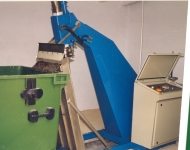 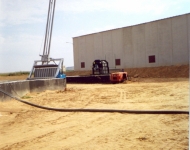 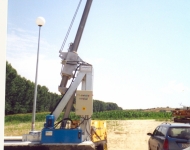 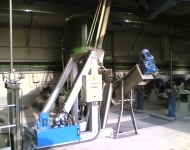 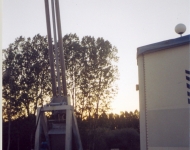 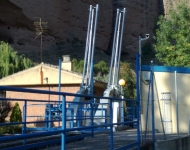 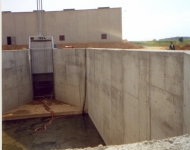